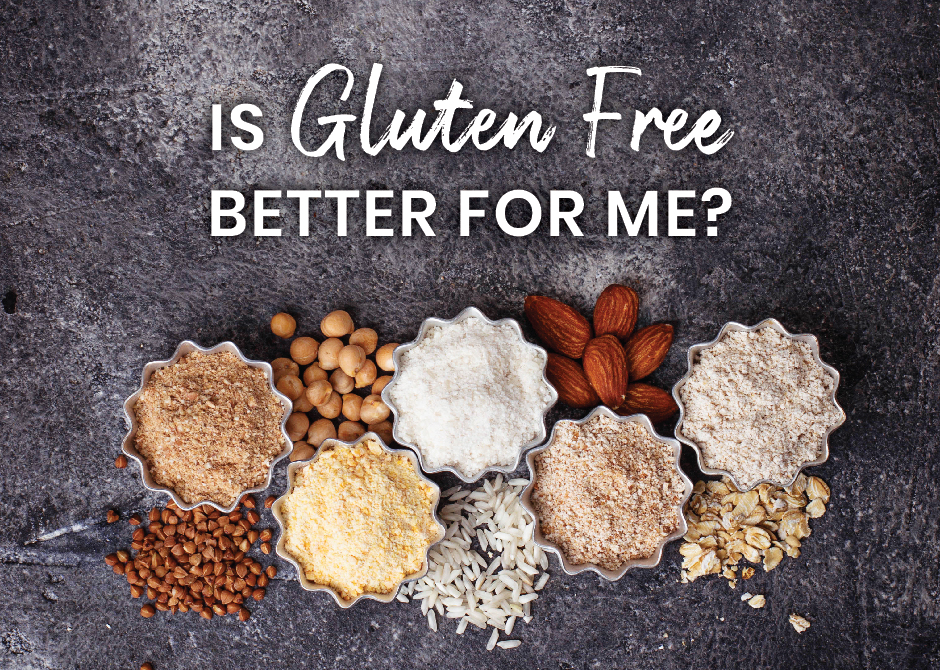 Is Gluten-Free Better For Me?

Posted May 01, 2019 in Food + Nutrition, The Healthy Kitchen by Happy and Nourished

Gluten is a protein found in wheat, rye, barley, and sometimes oats. Common foods that contain gluten include breads, crackers, baked goods, cereals, croutons, flour tortillas, pastas, and noodles. Gluten can often be hidden in items that you would typically not think to check such as soy sauce, salad dressings, granola bars, French fries, potato chips, and even processed lunch meats. The safest and easiest way to navigate grocery stores is to read ingredients lists and look for the “GF” seal on food packaging! The “GF” seal indicates that a food is safe to consume for those avoiding gluten. In order the receive this seal, companies must provide evidence of gluten-free manufacturing practices so cross-contamination can be avoided for those with severe allergies.

Non-Celiac Gluten Sensitivity is a newly coined term for individuals who experience strong reactions to gluten-containing foods, but there is little-to-no immune system involvement. There is still more research needed on Non-Celiac Gluten Sensitivity, but it appears that individuals will present with an intolerance to gluten, specifically with digestive disturbances. An individual knows their body better than any health professional, and it is important to these individuals advocate for themselves by ensuring their diet is needing their needs.

Is Gluten-Free Really Better for Me?

This can be a complicated and overwhelming question. Diets must be tailored to the individual. Not one diet will be best for everyone. For individuals with Celiac Disease or NCGS, it is critical to remove gluten from the diet. For individuals who thrive on lower carbohydrate and higher fat diets, this may be considered a “healthier” path. For the majority of Americans, without the appropriate medical need, a gluten-free diet is not one that is always healthier. Typically, individuals trying a gluten-free diet will stock up on items found in the gluten-free aisles of stores that replicate their beloved bread products. Many of these processed gluten-free items found in the cracker or cookie aisle will often have other additives and fillers necessary to replace the gluten. These products can be higher calorie, higher fat, and actually contribute to unnecessary weight gain. Many individuals believe that gluten-free diets will result in weight loss because it strictly eliminates higher sugar, higher calorie, and higher carbohydrate foods. The elimination of these foods can be a healthier option if you are typically consuming white refined carbohydrates, but a healthy diet can include these foods if in moderation if there is no medical need for restriction.

Whatever the reason is for avoiding gluten, it can seem overwhelming. What does a healthy gluten-free plate look like? It should contain fruits, vegetables, lean proteins, healthy fats, legumes, and gluten-free grains. Some gluten-free grains include brown rice, quinoa, and amaranth. There is no reason to eliminate all grains when pursuing a gluten-free diet. Our bodies prefer glucose, derived from carbohydrate consumption, as our main source of fuel for the brain and body! If we deprive the body of these necessary carbohydrates, our health may be jeopardized. In order to live a healthy gluten-free life, just read labels and find alternative grain sources in your meal!