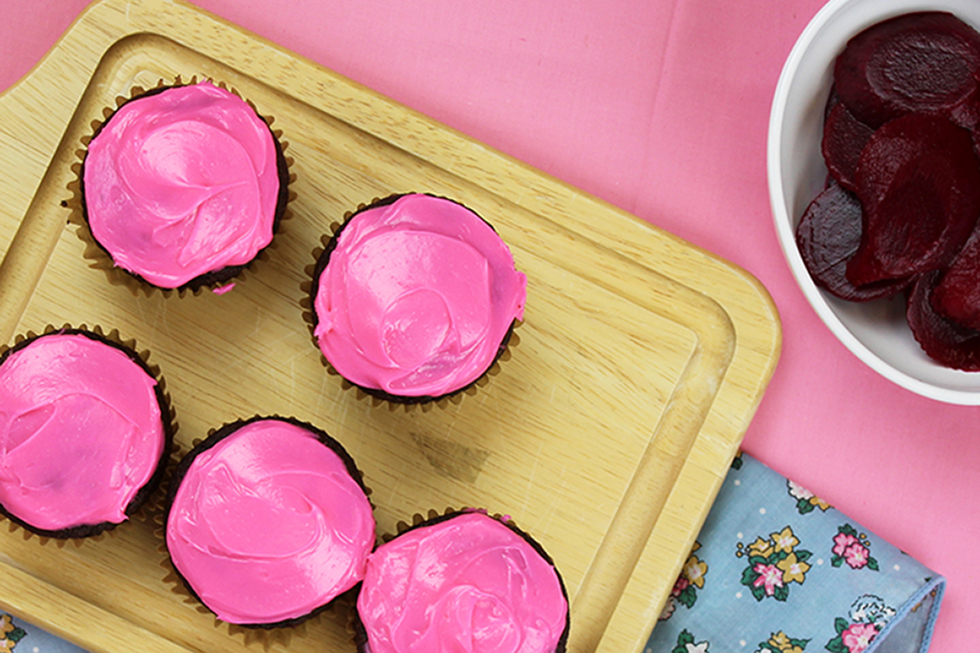 Posted Feb 07, 2020 in Food + Nutrition, The Recipe Box by Happy and Nourished

Beets are a funny little vegetable, aren’t they? For some, they’re definitely an acquired taste. For others, the beets at the salad bar have no chance.These dark hued roots have had a marketing makeover. Just like their other veggie friends, kale and cauliflower, beets are growing in popularity.

Beets are a good source of fiber, folate, antioxidants, phytonutrients and nitric oxide (which sound like a race car propellant doesn’t it), which make them perfect for a heart healthy diet. Their beautiful red color is a perfect way to Color Your Basket Red and make an all natural dye.

The antioxidants and phytonutrients in beets are noteworthy. Check out these facts:

Now, on to the nitric oxide. The nitrates in beets have 2 benefits. But before we get to that, let’s make sure that you know this is not the nitrates of processed meats but rather sodium nitrate found in leafy greens, beets and a few other lucky veggies. Okay, back to the benefits. First, the nitrates in beets can help reduce blood pressure (which is perfect for this Heart Health month). Second, they can reduce the amount of oxygen needed by our muscles during exercise.

A study determined that subjects who ate a serving of whole beets daily for several days could run faster than they could after eating any other vegetable! Some Olympic athletes were motivated by this study and decided they’d use beets in the 2012 Summer Olympics. Let’s just say that one British athlete in particular, Mo Farrah, won the gold metal in the men’s 5- and 10-kilometer races.

If we haven’t convinced you yet, let us leave you with one last beet plea. A survey found that those who eat beets on a regular basis have a lower risk of cancer, cardiovascular disease, diabetes, obesity and diseases of the digestive tract.

Not quite sure on how to begin adding in beets? If you aren’t one of those that clear out the beets from the salad bar then let us suggest this amazing Chocolate Cupcake recipe perfect for anyone you love this Valentine’s Day.

(Hopefully the fresh cut beets can replace this step) Bring about 1 inch of water to a boil in a large saucepan fitted with a steamer basket. Add beets, cover and steam until tender, 10-12 minutes. Transfer to a blender. Add buttermilk and puree until smooth.Reserve 2 tablespoons of the beet puree. Pour the rest into a large bowl.

Whisk flour, cocoa, baking soda, baking powder and salt in a medium bowl. Whisk egg, oil, 1 cup confectioners sugar and vanilla or almond into the beet puree in the large bowl. Stir in the dry ingredients until just combined. Spoon the batter into the prepared muffin cups.

Bake the cupcakes until a toothpick inserted into the center comes out clean, 18-20 minutes. Transfer to a wire rack and let cool completely.

To prepare frosting: combine the remaining ¾ cup confectioners sugar and cream cheese with the reserved beet puree in a medium bowl. Beat with an electric mixer until smooth. top each cooled cupcake with a generous 1 tablespoon frosting.

Get everything you need to make our Valentine’s Day Beet Cupcakes online!